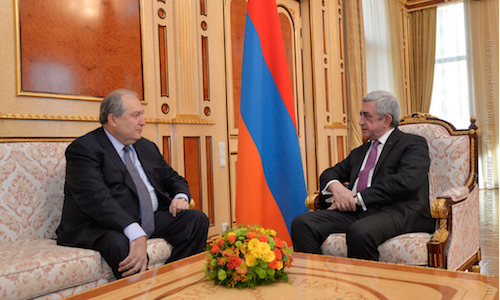 BACKGROUND: In mid-January, President Sargsyan announced that the ruling Republican Party of Armenia (RPA) plans to choose a presidential nominee with viable foreign policy experience and strong ties with the diaspora, but who is not currently active in Armenian politics. Armen Sargsyan seems to fit this description well. The newly elected president has a solid background in politics and international business and has close connections to Western business, political and think tank circles. Sargsyan is a long-time ambassador of Armenia to the United Kingdom, a former prime minister and an academic. He is the founder and president of the non-profit organization Eurasia House International, which fosters political and business ties between Europe, CIS countries and China and has carried out several large business projects across Eurasia. Sargsyan has also worked as a consultant for large Western corporations such as BP, Alcatel and others.

Observers believe that Sargsyan’s extensive contacts in Western countries are the main rationale behind his nomination. These connections will facilitate lobbing activities to advance the country’s interests and boost the international image of Armenia’s government, which is generally considered as strongly pro-Russian. This is especially crucial at a time when the government seeks to adjust its foreign policy to rekindle ties with Euro-Atlantic structures, after Armenia’s refusal to sign an Association Agreement with the European Union in 2013. Armenia has recently concluded a Comprehensive and Enhanced Partnership Agreement (CEPA) with the EU, which the European Parliament will expectedly ratify by May 2019, and is displaying a keen interest in boosting relations with the West. The government also plans to reinvigorate and tighten ties with the Armenian diaspora worldwide – the president-elect has already met with diaspora representatives in Russia, Vienna and Beirut.

Moreover, since Sargsyan lacks a strong association with the domestic political scene, he will not compete with the prime minister for power in domestic politics but will stick to his largely representative constitutional role. Yet, this can turn into a disadvantage – several observers point out that even though the president-elect strives to represent all Armenians, his mandate under the new constitutional system is relatively weak. The ruling party chose Sargsyan as the only candidate in the presidential race, whereupon a parliament with no significant opposition elected him. Therefore, a lack of direct approval from the voters can undermine his authority. An additional reason for the weakness of the presidential mandate is that the constitutional changes have little support in the Armenian public, which generally perceives them an instrument for further weakening the opposition. The constitutional referendum displayed irregularities and there was little information or debate to engage the public with the proposed changes, which has contributed to a widespread conviction that society will have even less impact on political life than before the shift.

IMPLICATIONS: Since the new system significantly downplays the role of the president, the nomination of the future prime minister in April draws the most attention. Republicans have not yet chosen a candidate for this post, yet according to local analysts, the most likely scenario is that the departing President Serzh Sargsyan will seek to retain power by assuming the prime minister post. The incumbent president has not publicly denied this possibility and declared that after his final term ends, he intends to play a role in ensuring the country’s security or assist in some other unspecified capacity. This would be logical since Sargsyan has an extensive military background – he was a commander in the war with Azerbaijan over Nagorno-Karabakh in the early 1990s and later held various top security and defense positions, including the defense minister post. Observers note that at a minimum, Sargsyan will retain leadership of the RPA as well as a behind-the-scenes influence on the government.

However, there is another possible outcome, since current Prime Minister Karen Karapetyan has voiced an interest in retaining his position. The appointment of Karapetyan, a former mayor of Yerevan and top executive in ArmRosGazprom and Gazprombank, as prime minister in 2016 was part of an effort to convince the public that the ruling party prioritizes economic reform and better management. RPA representatives promoted Karapetyan as a non-aligned technocrat and a skilled manager, who would be able to tackle the most crucial socioeconomic challenges. He was widely seen as a transitional figure with no meaningful connections to the local political and business establishment, whom Serzh Sargsyan would replace upon the expiration of his final presidential term. However, Karapetyan has proven able of gaining powerful supporters for his reform agenda. In 2017, a group of influential Russian-Armenian businessmen publicly voiced support for the prime minister and far-reaching economic reforms planned by the government. They also launched a multi-million dollar investment fund to support business initiatives in Armenia across the various economy sectors.

A majority of the voters prioritizes economic improvement and the prime minister has gained substantial popularity. Many perceive him as the person in the current leadership most capable of fighting corruption and reforming the economy, which started to show modest signs of recovery in 2017. To sustain this growth, the government has proposed a comprehensive economic reform plan, which in conjunction with the expected benefits of a partnership agreement with the EU could translate into better economic outcomes in the coming years. Moreover, Karapetyan’s position as an outsider to the old political establishment contributes to his appeal among voters who are tired of the political stalemate.

Karapetyan’s rising popularity will definitely make him harder to replace. It is therefore likely that the incumbent prime minister will be offered an important position in the new cabinet, especially since his reputation as reform-minded can help him win wider approval both in Armenia and abroad. In addition, Karapetyan is widely considered pro-Russian and strives to maintain Armenia’s standing with Moscow. This remains crucial for Armenia despite its reinvigorated relations with the West. Observers note the possibility of a power-sharing agreement between Serzh Sargsyan and Karapetyan in the future cabinet leadership, where the latter could oversee economic reforms whereas the former would be responsible for security issues.

CONCLUSIONS: It is unlikely that the political shift in April will mark a revolutionary change in Armenia’s domestic and foreign policy. Since RPA has exercised unrestricted influence on the nomination of candidates for key leadership posts, it is up to the ruling party’s heavyweights to decide on the future prime minister and the cabinet. The future government will likely continue with serious economic reforms that are necessary in order to reap benefits from economic cooperation with the EU and the Eurasian Economic Union, to take advantage of the signs of economic recovery and to placate the public, which is tired of the prolonged economic hardship.

The choice of Armen Sargsyan as president suggests that Armenia remains devoted to reinvigorating its relations with Euro-Atlantic structures and counts on Western investments to boost its economy. However, this does not imply that Yerevan will alter its strategic orientation toward Russia. On the contrary, Armenia evidently avoids endangering its cooperation with Moscow at any cost especially in the security and defense spheres, since Russia remains a key player in the Nagorno-Karabakh peace process and Armenia’s strategic ally in the military sphere. However, as the conflict between Russia and the West is heating up over the poisoning of former Russian military intelligence spy Sergey Skripal and his daughter in the UK, the Armenian government may find it increasingly difficult to navigate between the two.