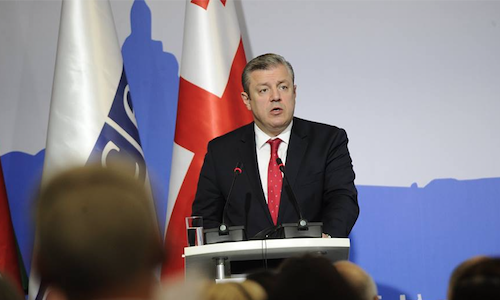 BACKGROUND: Georgian voters went to the polls in October for parliamentary elections that yielded more lopsided results than many had predicted. The ruling GD party won in a landslide – receiving nearly 49 percent of the vote – while the main opposition party, the United National Movement (UNM), was a distant second with 27 percent. The only other party to pass the requisite 5 percent threshold and enter parliament was the anti-Western Alliance of Patriots. The GD’s resounding victories in both the October 8 election and the October 30 second round voting in single district constituencies mean it will hold a constitutional supermajority, with 115 out of 150 available seats.

Despite a small number of isolated incidents, the vote was judged to meet democratic standards and fundamentally represent the will of the electorate. The European Union, the U.S. Government and Congress, the Organization for Security and Co-operation in Europe (OSCE), and other independent observers deemed that the election was largely free, fair, competitive and well-administered. However, turnout was historically low at just 51.6 percent. In addition, as could have been predicted by the existing vitriol between the GD and UNM, the latter claimed the elections had been rigged by the government.

Those who have called into question the validity of the election results have done so with such frequency and fervor that international outlets, such as Politico, ran headlines that reflected not the fact that the elections were deemed unanimously competitive and well-administered by independent observers, but that the GD won in “disputed polls.” It is clear that the UNM, after such a defeat, had little in the way of explanations left other than claims of rigging. However, resorting to dubious accusations such as these resolves nothing, and instead damages the country’s reputation abroad. It also belittles the fact that Georgia just held what may have been its freest and fairest elections since independence, that it saw a shift in leadership through elections in 2012, and that this was its third straight round of free elections since then. To say that this is a rarity among former Soviet Union countries is a major understatement.

IMPLICATIONS: Critics have been quick to point out that the low voter turnout is indicative of an electorate that is frustrated and to a degree apathetic towards its government. This may well be true, as many serious problems remain. Despite modestly increasing foreign investment and public spending on infrastructure and construction projects, crucial FDI and remittances have not been significant enough to offset the huge current account deficit, which is close to 12 percent of GDP. The national currency, the Lari, has suffered vast depreciation due to this misbalance between imports and exports. Economic growth has slowed from an average of 5 percent in the past decade to about 2 – 3 percent in the last two years. The sluggish pace of economic growth and a high unemployment rate are the main complaints that Georgians have against the government. Additionally, Russia continues to occupy close to 20 percent of the country, and just recently ratified a military agreement to set up a “joint armed force” with breakaway Abkhazia. Despite years of efforts and hundreds of casualties in Afghanistan, Georgia still has no clear timetable for NATO or EU accession. This has inevitably led to a few Georgian politicians trying to capitalize on popular frustrations with the perceived weak Western support by advocating policies more favorable to Russia.

With all of that said, there are a number of tangible reasons to be cautiously optimistic. Though economic issues are still prevalent, according to the World Bank almost 500,000 people rose above the national poverty line over the past 4 years. Georgia is ranked 16th in the Ease of Doing Business rankings, higher than Switzerland, The Netherlands, Germany and France. NATO and EU accession remains without a well-defined roadmap; however, there are positive signs of stabilization and westernization of the former Soviet country. Exports to the EU are up 19 percent in four years, and around 32.6 percent of Georgia’s trade takes place with the EU due to a free trade deal with the bloc. Further, EU states agreed in early October to grant Georgians visa-free travel to the Schengen zone once specific new safeguards are in place. Thanks to continued close cooperation with NATO, the Georgian armed forces have eschewed their outdated roots and adopted Western tactics, techniques, and procedures that have crucially enhanced their interoperability with the alliance as well as the U.S. military.

According to Transparency International’s Corruption Perceptions Index, Georgia ranks higher than its neighbors, as well as every southeastern European country and Italy. Additionally, it is first in its region by a wide margin in the World Justice Project’s Rule of Law Index. The number of tourists visiting Georgia increased by 19.7 percent on a yearly basis in 2016. Tourism is one of the fast-growing sectors in Georgia, as the government has honed in on targets with state-funded marketing campaigns in recent years to attract more visitors. In October alone, the number of tourists stood at 215,000, a 20.9 percent yearly increase.

Therefore, although the processes of stabilization, westernization and integration have been painfully slow, there has been significant progress trending in the right direction. Especially against the backdrop of the unpredictable global results of the Brexit referendum and the U.S. election, an incredibly difficult geopolitical context being situated between Russia, Turkey and Iran, and the fact that it is still a young democracy, Georgia and its relatively boring elections reflect a reason for optimism.

CONCLUSIONS: One must not take the latter point for granted. Georgia regained its independence from the Soviet Union a mere 25 years ago, and when compared to other post-Soviet nations, it is far ahead of the curve in terms of many indicators. As discussed above, much work remains to be done, and a great deal will depend on how the GD uses its newly-gained supermajority in parliament. High rankings in indices do not always translate into economic growth and job creation, and the government must do a better job eliminating existing economic bottlenecks. The hope is that the ruling party will lead in an inclusive and non-unilateral way – respecting opposition viewpoints – while enacting responsible policies and reforms.

Prime Minister Giorgi Kvirikashvili will be a pivotal figure moving forward. Thus far, he has shown far more political savvy and restraint than his predecessors, largely depersonalizing longstanding feuds and avoiding the name-calling that characterized previous rivalries. He must build on this and convince the public that he – and not the shadow of billionaire Bidzina Ivanishvili – is the one truly making decisions and setting policy. As of now, the perception not just among the opposition but in a majority of the country is that Ivanishvili is ultimately in charge of major decisions. If Kvirikashvili succeeds in changing this perception, then the country will have taken another large step towards establishing itself as a stable and credible democracy.

AUTHOR’S BIO: George Tsereteli is a Europe and Eurasia Research Assistant at McLarty Associates. He is a recent graduate of the Strategic Studies Program at the Johns Hopkins School of Advanced International Studies.